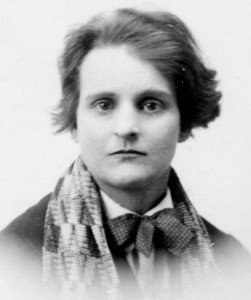 Sylvia Beach, born Nancy Woodbridge Beach, was the daughter of a Presbyterian Minister. When Beach was 14 her father went to work in France and took her along, and in the three years she lived there, she quickly fell in love. In 1906 Beach and her father returned to Princeton where her father became minister of the First Presbyterian Church of Princeton (the predecessor of the Nassau Presbyterian Church). Later in her life Beach made several return trips to Europe where she became a leading expatriate figure between World War I and World War II. During her time there, she founded her famous bookstore Shakespeare and Company on November 19, 1919 in Paris.

Soon after opening its doors, the small shop quickly became a hub that attracted both French and American readers along with several aspiring writers that Beach offered hospitality and encouragement. She provided sanctuary to writers such as Joyce, Gertrude Stein, Ezra Pound, Ernest Hemingway, F. Scott Fitzgerald, Janet Flanner and the poet H. D. She is most famous for publishing Joyce’s controversial novel Ulysses. She recognized that by fighting the censorship of Joyce’s novel she was also fighting censorship as a whole. She also realized the impact that this fight would have on her shop, in a letter she wrote her sister in 1921 she famously said “‘Ulysses’ is going to make my place famous.” Besides her large impact on the literary world, Beach is known for her work for the Red Cross during the war.

Although she was not born in Princeton, when her father became the minister of Princeton’s First Presbyterian Church, Sylvia grew up around with the University and its institutions. And as her fame grew in the literary world, so did Princeton’s familiarity with her. The Sylvia Beach Papers, a collection of her notes, writings, translations, musings, and autobiography were acquired by the University in 1964 and archived in Firestone Library. At present, the collection stands at 180 boxes, or roughly 78 feet of paper. In recognition of her contributions, the Borough of Princeton named the one-way street by the Princeton Public Library “Sylvia Beach Way”.