The Surprising Past & Uncertain Future of an American Protestant Powerhouse

As Presbyterians, we are part of a much wider stream within American Protestant life, often called the Mainline. This tradition was long a powerhouse, which wielded vast influence across all sectors of society. But in recent years most of the headlines it has garnered have centered on its decline. In this series we will revisit the Mainline’s surprising past, paying especially close attention to how this unwieldy Protestant coalition navigated the fierce challenges of the 20th-century public square. Along the way we will also wrestle with the uncertainties of the Mainline’s present and future. In this moment of flux and crisis, where might God be leading us? 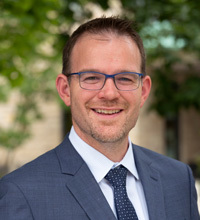 Heath W. Carter is associate professor of American Christianity at Princeton Theological Seminary, where he teaches and writes about the intersection of Christianity and American public life. He earned a BA in English and theology from Georgetown University in 2003, an MA from the University of Chicago Divinity School in 2005, and a PhD in history from the University of Notre Dame in 2012. He came to Princeton from Valparaiso University, where he was on faculty from 2012 to 2019. He spent the 2016–2017 academic year as the William S. Vaughn Visiting Fellow at Vanderbilt University. He and his family have been actively involved at Nassau Presbyterian Church since moving to Princeton.

We are living through a season of crisis for both American democracy and American Christianity. Together we’ll explore some of the challenging features of our contemporary cultural landscape, including hyper-polarization, widespread decline of trust in institutions, and the rise of “the nones.”

For a generation now the story has been that, around the time of the infamous Scopes Monkey Trial, American Protestantism split into conservative and liberal camps, never to meet again. But the reality is much more complicated. Together we’ll explore the surprisingly capacious contours of the 20th-century Mainline tent.

November 6: The Perils & Promise of a Big Tent, Part I: the Civil Rights era

Together we’ll reflect on how Mainline Protestants’ record on Civil Rights underscores both the perils and promise of a big-tent faith.

Together we’ll reflect on the extent to which Mainline Protestants succeeded in holding together their unwieldy, big-tent coalition in the decades following the 1960s.

November 20: Listening for God’s Call at the End of the (Main)Line?

Readings: Martin E. Marty, “From Declinism to Discovery,” The Christian Century; James Roh, “First Top Female Pastor at SLC’s First Presbyterian comes as ‘a bolt out of the blue’ for Congregation,” The Salt Lake Tribune

While it’s easy to become overwhelmed by stories of decline and worries about cascading crises, we have not been given a spirit of fear. Where might God be calling us to go from here?